We were featured on NBC's "Last Comic Standing!" Watch those clips, too!

AUDIO CLIPS of our recent appearances on the Dennis Bono Show radio show! 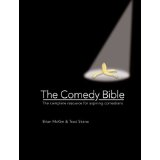 Brian McKim and/or Traci Skene
BRIAN MCKIM and TRACI SKENE are the authors of "The Comedy Bible: The Complete Resource for Aspiring Comedians," published in 2011, by Barron's Educational Series (U.S. and North America) and Quintet Publishing Ltd. (U.K. and Worldwide)! For fifteen years, they wrote and published SHECKYmagazine.com, the WWW's most beloved magazine about standup comedy. Brian has appeared on "Late Late Show with Craig Ferguson" and was a semifinalist on Season 7 of NBC's Last Comic Standing. He is a writer and professional standup comic! He has also appeared on numerous network, syndicated and cable TV shows and on "The Bob & Tom Show."

Traci was featured on Season 7 of NBC's Last Comic Standing. She is a writer and professional standup comic! She has been one of US Weekly's Fashion Police since 2001. She appeared on VH-1's "Fools for Love," "VH-1's Standup Spotlight," and A&E's "Comedy on the Road." Her book, "Sometimes Ask A Man" hilariously skewers traditional social and sexual mores as well as modern feminism and is available on Amazon.com.

"The funniest show I've seen in quite a while. To find out you 2 were married made twice as good!! Thank you guys sooo much for the experience. Buying your book ASAP! :)"

"You and Traci had us in stitches! Two wonderful shows wrapped up into one! We saw your Youtube clips and decided yours would be a great show."